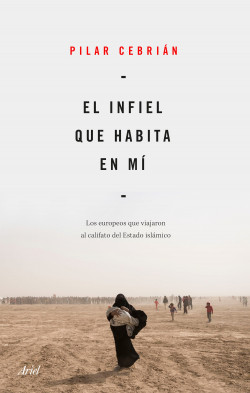 The Infidel That Dwells In Me

Europeans who traveled to the caliphate of the Islamic State.

Yolanda, Tarik, Bilal, Léonard, Romina and Fadel are militants of the terrorist group Islamic State. In the company of their families, with other recruits or alone, they left Europe to move to the terrorist enclaves of Syria and Iraq. This work is a direct look into the eyes of 21st century jihadists, a unique legacy of Europeans who wandered into the confines of ISIS and now languish in decrepit detention centers in Baghdad or in the Kurdish provinces of Syria. The political project of the caliphate subjected the protagonists of this book to the most tremendous hardship, starvation, violence, death and despair. But the migration to a supposed “better life,” as they describe it in their own words, was motivated by a myriad of reasons that this book analyzes.

What was the childhood like of the second or third generations of Muslim migrants in Europe? How did they construct their identity? How did the converts approach Islam? And what as the process of radicalization like? What was the trigger for their journey to the caliphate? What position did they hold in ISIS? Did they participate in the intelligence brigades to carry out attacks in Europe? What has become of them now that they are prisoners of war? Are they repentant? What will become of the jihadist wives? And their children, what will happen if they return to Europe? And what will happen if they don’t?

Pilar Cebrián has interviewed dozens of jihadist prisoners in Syrian and Iraqi jails (she is the only foreign researcher to have gained access to prisoners in Iraq) and has cross-referenced these testimonies with the accounts of family members, friends, guardians, lawyers, judges, diplomats, police and social agents to compose the map of these unfinished biographies that one day crossed the perverse path of jihadist terrorism.