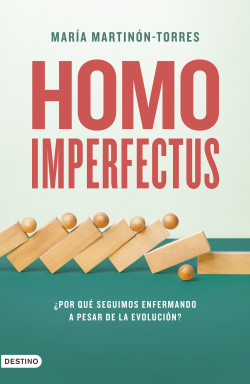 Why do we continue to get sick in spite of evolution?

The story of human evolution has mostly been told in terms of successes, of continuous increase of capacities that culminate in a quasi-perfect being, lord and master of the planet through the acquisition of key adaptations. A hominin that becomes bipedal and leaves the heights of the trees, gaining a new freedom to enter unknown territories. A hominin that begins to eat meat and thus expands its diet and with it the world in which it can make a place for itself and survive. A hominin that learns to create and use tools with which to defend itself, attack and hunt, and thus make its way. A hominin whose brain will increase in size to eventually take up the baton of its own development and biology. A hominin that will develop a sophisticated communication system with which it will be able to talk about what exists and what does not exist, anticipating the future. A hominin, in short, that will go from adapting to the world to adapting the world to itself. Unquestionably, from a biological perspective, we are a successful species, overwhelmingly abundant, that has managed to inhabit practically every corner of the Earth.

But in this idealistic portrait of humans, where does disease fit in? Where are the ailments? The imperfections? Indeed, if we go along with the theory of evolution and natural selection, in which we expect the best-adapted forms to triumph, it is difficult to explain the extent of Homo sapiens’ physical and mental frailties.

Why do we get sick? Why do we age? Why does a species that we assumed to be hyper-adapted live with suffering on a daily basis? Why haven’t so many defects been eliminated in the course of our evolution? Are we a botched design of natural selection? Over the course of our history, our main concern, survival, has given way to another priority to which, globally, an enormous amount of resources is devoted: preserving health and promoting well-being; in the end, the search for a better quality of life. How then, do we explain all our ailments? Do we simply assume them as inevitable failures of our biological machinery? Or may there be in some cases an evolutionary angle that gives them another face?

An intelligent look at our past that uncovers how our greatest frailty, illness, sheds light on the evolution of the species.